The “It’s On Us” Sexual Assault Prevention resolution was passed at the SGA’s Monday, April 20, meeting.

The resolution will join Auburn’s name with 200 other universities across the United States, six of which are in the SEC, in an effort to educate about and stop sexual assault.

Trey Fields, senator for the College of Liberal Arts, promoted the bill and discussed the goals of the campaign as well as the bill.

“This bill aims to instill a shared responsibility to prevent sexual assault and to provide resources for individuals to recognize and pre-empt the pattern of sexual violence,” Fields said.

The White House and The Center for American Progress launched the campaign in September of 2014.

According to The White House Blog, “studies estimate that one in five women is sexually assaulted while in college. Most often, the act occurs in her freshman or sophomore year, usually by someone she knows. And only 13 percent of rape survivors report their assault. The culture of violence and silence at our college campuses contradicts everything we stand for as a country.”

Fields also discussed the amount of support he had received in the week leading up to the senate vote from his peers and the opportunity this presents for Auburn and the students who take the pledge.

“I know there are a lot of people who are passionate about this and seeing it come to fruition at Auburn and getting the conversation started here,” Fields said. “I think we have a great opportunity to be some of the people who are going to blaze this trail.”

The campaign encourages students to sign a petition and take a pledge promising not be a bystander to sexual violence, but, instead, be a part of the solution.

In addition to the campaign, this bill allows for the establishment of the Green Dot Strategy. According to the Green Dot campaign website, “the model targets all community members as potential bystanders, and seeks to engage them, through awareness, education and skills-practice, in proactive behaviors that establish intolerance of violence as the norm, as well as reactive interventions in high-risk situations- resulting in the ultimate reduction of violence.”

Eric Smith, director of Health Promotion and Wellness Initiatives, said the Green Dot strategy has helped reduce sexual violence drastically at universities that it has been implemented at.

“The Green Dot campaign has actually shown to reduce sexual violence by up to 50 percent on some campuses,” Smith said. “So imagine if you, yourself or a friend of yours took a survey what that number would be. Now imagine if we could eliminate that by 50 percent.”

When the Green Dot campaign launched at Auburn a few months ago, Smith said he realized at an implementation group many of the people in the Auburn community had experienced some form of sexual violence.

“When we asked people in the group using iClickers if they had experienced some sort of sexual violence, over 70 percent clicked that they had,” Smith said. “We could reduce that by 50 percent with this campaign.”

Smith said he often reads the conversation on Yik Yak after the University sends out an email notification about a rape or sexual assault to understand what students are thinking.

“It turns into this ‘he said, she said’ battle,” Smith said. “The Green Dot is about acknowledging a third character in that story because, in pretty much every one of the sexual assaults that I’m aware of that have occurred on the campus, there is always a friend nearby who could have pulled somebody out or prevented that from happening.” 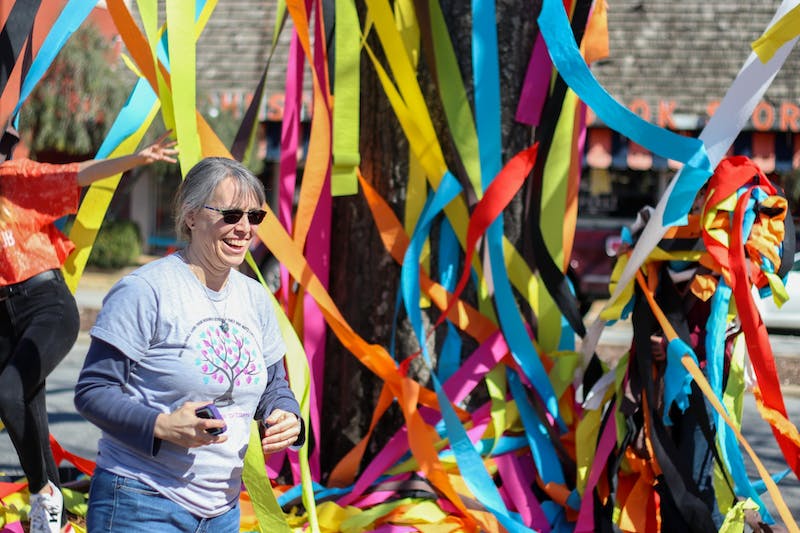