SGA’s Monday, April 13 meeting saw the unanimous passing of a resolution that was introduced during last week’s senate meeting as well as the confirmation of the SGA cabinet and the SGA cabinet assistant vice presidents.

Jesse Westerhouse, executive vice president of initiatives, discussed the resolution that will change the way Auburn students register for classes. The resolution is for a new class registration model, called Tiger Scheduler, which Westerhouse said will ease the usual excruciating registration of classes, while also freeing up valuable faculty time.

“It will be really good for when you’re in a room with 40 or 50 students and you’re trying to write down the CRNs and get it all figured out,” Westerhouse said. “With this, you type in your classes and you’re really able to run through 30, 50, even 100 different schedules. It will also free up a lot of time for advisers to spend with students outside of registration.”

Walker Byrd, SGA president, said the Office of the Registrar presented them with two different class registration models which senate exec researched and finally came to the conclusion that the visual schedule builder was the best fit for Auburn students.

“We have done research and heard several presentations and decided the visual schedule builder is the best option for Auburn,” Byrd said. “Just the interface alone seems easy to use like the iCalendar on an iPhone.”

The new model will allow students to block off time periods and the schedule builder will build a schedule around that time period. Westerhouse said this type of registration will no longer require CRNs, but instead students will only need the name and number of the class or name of the instructor, unless students like the registration process now.

“This will really do away with the CRNs and instead of having those, you will only need to know the name of the class and the course number,” Westerhouse said. “If you like what we have now, you can always stick with that because if we do implement this it will kind of be a separate add on.”

Other features of the visual schedule builder include the ability to pick what time of day you would like classes to be, such as all morning, mid-day, or evening classes. The schedule builder also allows students to choose an option which gives them the most days without classes if those classes are available, Westerhouse showed in his presentation.

“You can see it’s not always going to be the perfect schedule you want,” Westerhouse said. “But it’s really cool all the features this has and is really interactive and good for the student body as a whole.”

* Eric Smith, director of health promotion and wellness services, spoke about a Green Dot Bystander Intervention Strategy that was sparked from a campaign called the “It’s on us” campaign which was started at the White House in September 2014.

* Trey Fields, senator for the College of Liberal Arts, is sponsoring a piece of legislation pertaining to the Green Dot Bystander Intervention Strategy that will come across the senate floor next week. 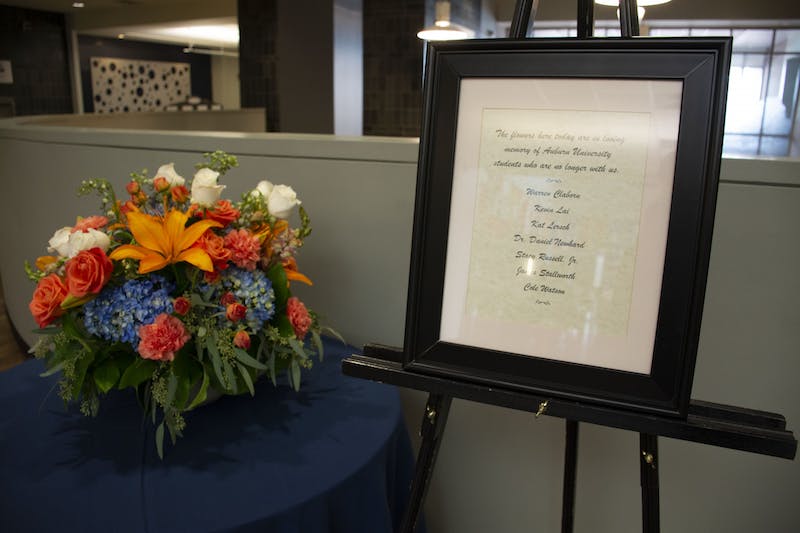