Editorial: Left out of the loop

Student Affairs has recently revealed plans to combine all student media, The Plainsman, WEGL, “The Glomerata,” “The Circle” and Eagle Eye TV under one umbrella.

What does the term umbrella imply?

We wish we knew. From a vague email, a hastily thrown-together meeting the Thursday before spring break and a series of individual meetings over the break, student media still don’t have important details about this restructuring.

Some new features, such as new furniture, remodeling the offices and promising more advertisement sales, are ideas we can get behind.

Others, such as laying off dedicated employees and combining offices, we cannot agree with, especially when we were not consulted this semester. Also we believe it is wrong the decisions came after a few quick visits around our offices and a 2010 external review.

Throughout the meeting with students, where the majority of our information was gathered, it was said The Plainsman and the other student media are professional organizations. But the way we were consulted, informed and spoken to was not how you would treat professionals.

We were told what was going to happen and given no options. Children are told what to do. Adults make decisions and compromises. We felt we were not respected enough to be consulted.

Overall, this situation was poorly handled. We are not against change. Change is something that needs to happen regularly in the media industry. More revenue from advertisement sales is necessary to keep our paper alive. New furniture will be great. Remodeling the offices will help.

However, many of the changes they say they are making would be detrimental to our operations, something we could have easily informed them if we had been consulted. Also, the external review, upon which they decided most of their changes, was conducted five years ago. If changes were truly needed they should have been put in place after the report came out.

We were told we were not informed about this restructuring because of the human resources issues dealing with hiring personnel.

Judy Riedl, general manager and advertising director for The Plainsman, has been an employee here for four and a half years.

Riedl and Dafni Green, Eagle Eye TV and WEGL adviser, were consulted in regards to what restructuring needed to happen in order to better student media in both revenue and content and gave detailed feedback.

Student Affairs then laid them off.

Using some of their ideas for remodeling without telling them their jobs would be at risk and then laying them off is a betrayal to them and the concept of the Auburn Family.

Five new full-time positions will be created as part of this so-called rescue of the student media. Judy has been told they can apply for these new positions. However, when the University has shown such positions are not stable and, even after 26 years of employment, you are easily expendable, it’s understandable if they feel scorned.

Among these five new positions will be an editorial adviser. They will work mostly with the print media, The Plainsman, “The Glomerata” and “The Circle.”

To clarify, one person will advise a newspaper, a yearbook and a literature and art magazine. The Plainsman alone currently uses three people to assist with our online content and weekly editions.

Our current adviser, Austin Phillips, who will also be laid off once the new editorial adviser position is filled, is one of three people. On paper, his job requires only part-time work.

In reality, he is there to help at 3 a.m. on a Sunday morning when breaking news happens over a holiday.

He reads the entire paper and reviews our stories in meetings with editors to suggest what other options we could have done and what we could do better. And that’s not even half of what he does.

We can only hope the new adviser will go above and beyond what is simply written in their job description as all of the current employees do.

As The Plainsman is officially dragged under Auburn University’s student media umbrella, we hope to maintain our editorial independence, even if that is not always in the University’s favor. In the meeting, we were assured our editorial adviser would not be able to change our content.

But we feel powerless. Student Affairs has shown they have no problem exercising every power to control student media.

Student Affairs has stepped onto a slippery slope that we are concerned will end with them controlling The Plainsman’s content. We are nervous about the power student affairs has shown they have.

At The Plainsman, we are worried 122 years of tradition of providing unbiased news will be slowly converged into another public relations department for the University.

Those who made the decisions to restructure do not know the ins and outs of every medium like they should.

If they did, they would not be moving the advertisement and marketing section away from our office, while potentially moving Greek Life offices downstairs into the current “The Glomerata” and “The Circle” office. They would have seen that on deadline days frantic trips to change out or reorganize ads happen mere minutes before deadline.

They would understand FCC guidelines prevent WEGL from running advertisements because it is currently on 91.1, a Class A non-commercial college radio station. WEGL can have sponsorships and direct listeners to a website, but they are limited in what they can say in promotion of a business. Advertisements are not allowed.

They would also know we are not isolated, which is one of the reasons they listed for moving Greek Life downstairs. We do our best to cover every event that happens on campus.

Throughout the meeting, we were assured we would keep our independence and we were still separate organizations. If that is true, then we need to maintain separate offices and finances.

Student Affairs representative Elizabeth Stone should have visited the offices Student Affairs planned to re-do more than once or twice this semester.

We are the student media. We have a voice through print, online, television and radio. It was instilled, through our training, we should use this voice to keep conversation with the Auburn Family so they remain informed and keep the University in check.

Now it is Auburn’s turn to keep us in the conversation. Many of the decisions made can not be changed whether or not they maintain the integrity and independence of one of Auburn’s oldest institutions. From now on, involve us in every new step along the way.

Talk is cheap, and we have seen how easily spoken words can be skewed. We want these promises in writing. 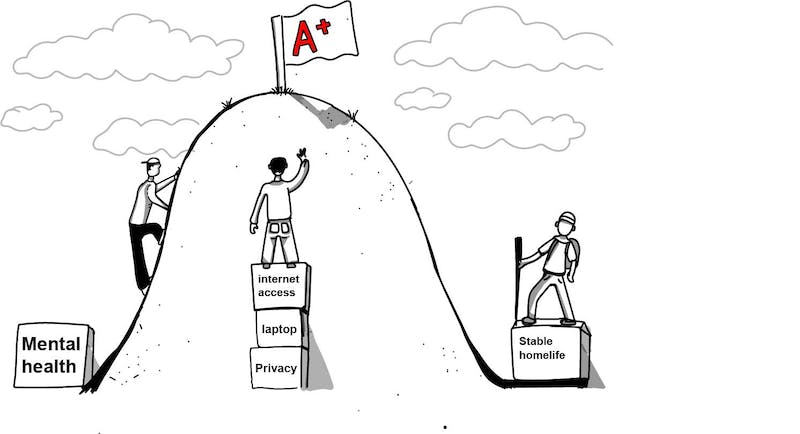