After a year of serving Auburn students, SGA president Mary Margaret Turton will pass the baton on March 1, 2020, to Ada Ruth Huntley, who was recently elected to the position.

During this election cycle’s week of campaigning, Turton, senior in business analytics and public relations, said she couldn’t have loved Auburn more. She saw students from all aspects of Auburn life come together on the concourse to support their candidates for the position she’s filled for the past year.

She said she thinks that’s what empowers SGA to be successful: having a student body that voices their opinions so SGA can advocate for them.

“If we didn’t have the support of the student body, you would have students in leadership positions who wouldn’t be able to actually make a difference,” Turton said. “In order to be a successful SGA, we have to get that feedback. We have to consistently be engaging with the campus community.”

In the final days of her campaign, Turton said her administration has an opportunity to finish strong. She planned to see the Sexual Assault Nurse Examiner program that launched this January at the Auburn University Medical Clinic fully funded through Tiger Giving Day on Feb. 19.

She said her administration planned to continue promoting and stabilizing the Lyft ridesharing program, which also launched this January.

According to Turton, over 630 riders utilized the service in the first month.

“One thing that’s been important to our team has been closing as many books as we can,” Turton said. “That way, the next team is able to open up their own chapters.”

She said she’s excited for Huntley’s administration to take the reins and is also proud of the people she spent the last year working with.

“Before campaigns began over a year ago now, I was motivated to serve in this role to my fullest capacity and, if elected, to have the potential to truly embrace the differences that are the Auburn student body … so that way I could then advocate to make life better — even in a small way,” Turton said. “That’s certainly how I defined the role a year ago, and it’s still how I define the role.”

However, she said she’s learned to prioritize goals and work with her team in order to accomplish a tangible difference.

“An idea is just an idea until we get everyone on board,” she said. “Seeing the value of having an idea, but then prioritizing based on the feedback and based on what the student body actually wants, has been one of the most important lessons I’ve learned.”

Even though it took until January for two of her priorities — the Lyft ridesharing program and the SANE nurse certification — to be implemented, it wasn’t hard for her to stay encouraged.

She said she understands it can be frustrating for students who want these programs but aren’t able to see the steps it takes to manifest them.

“I guess whenever you are so closely working with the med clinic or with the Lyft deal, I think that’s whenever you do see those baby steps, and they are huge milestones in the moment,” Turton said. “So that’s always encouraging.”

According to Turton, the AUMC has already seen at least one student through the SANE program.

“Just knowing that in such a traumatic and horrible situation … that resource that we advocated and worked on for eight months … did make a difference in such a horrible moment and did improve that student’s experience at Auburn,” she said. “Because if they had not had it, that experience would have been even worse. Knowing that is definitely what keeps you going, and hearing those situations where you made an impact on someone individually — that’s certainly the most important part.”

Using her position with the Board of Trustees, Turton said she convinced leaders to support more need-based aid for students in order to foster diversity.

“One of the most tangible ways we would be able to see more diversity of thought is by having more students from different backgrounds at Auburn,” she said.

She said they have been promised more need-based student aid for the next admissions cycle.

As president, Turton also advocated for safer crosswalks around campus.

“I can’t tell you words I love more than crosswalk technology,” Turton said. “It’s so scary as a driver as well as a pedestrian. Auburn is a well-lit campus and community, but sometimes it is so hard to see.”

In an era of distractions, she said it is never okay to be distracted at a crosswalk. She’s hopeful the new technology will aid both drivers and pedestrians.

The day after Huntley was elected SGA president, she had lunch with Turton.

“I’m so proud and so happy for the year that she’s in store for,” Turton said.

When March 1 arrives, Turton said she wants Huntley to be “ready to pick up the ball and keep running.”

“If we can get through the walking stage during this month of transition, that’s going to set the student body up for success. These are too important to drop the ball,” Turton said, tapping on one of the binders she’s giving to Huntley.

Turton said she hopes students trusted and felt represented by her administration.

“It’s been a great year,” she said. “I’m so thankful for my team and the experiences we had and everything I’ve learned, but because I believe that Auburn is in good hands with the new team, I’m excited to finish my last couple of months at Auburn with my friends and focusing on the student experience. That is what led me to want to be in this role.”

Turton plans to work for ExxonMobil’s business analytics team in Houston after graduation.

Turton said she will keep serving Auburn in any way she can, and she’s excited to finish her time on the Plains strong.

But she’s not ready to leave it.

“We’ll cross that bridge when it comes in May,” she said. 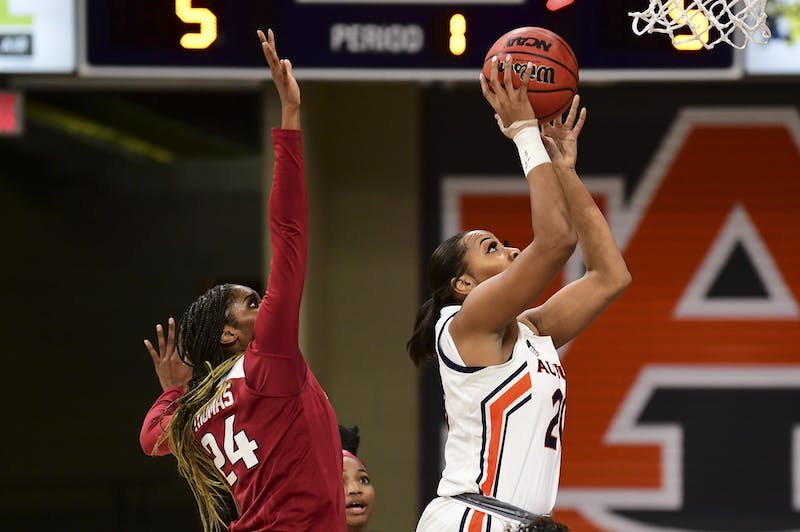